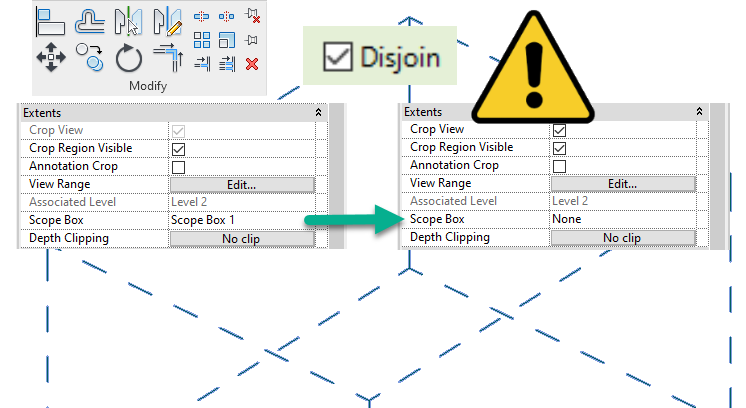 During the last couple of weeks I’ve started noticing a series of strange behaviours while working with and supporting Revit 2022. Support requests from customers and claims of strange bugs turned into several personal encounters with surprising results. And it all comes down to one thing – that little checkbox saying “Disjoin”.

Before I never really used Disjoin – except for separating walls from other walls. But in Revit 2022 for some reason Disjoin have started to give me headaches and troubles like never before. And I suspect it all boils down to this tiny little new feature (or improvement) in Revit: Remember Modify Tool Settings

In Revit 2022, the application now remembers your settings more than before and options which were not that often used before seems to be remembered and checked when you least expect it. And I especially noticed this with Disjoin. Has it always been this way with Revit? Perhaps. But why haven’t I noticed it before during +10 years working and supporting customers with Revit?

Anyway – dangerous in only Revit 2022 or all versions, doesn’t matter – be careful with Disjoin!

So what are the “bugs” or surprising behaviour I noticed so far?

But the scary thing is that the original Legend view is now Deleted – it’s gone from the Sheet.

This one came from a customer – place a loadable family (like a desk) on top of a floor. Following old and strange Revit behaviour the family is now not really hosted to a Level but hosted to the Floor, or rather – hosted to a 3D Face on that Floor. Although it’s just a normal, everyday Level based family. I call it “half-Level-hosted”. Over the years that have given rise to many strange things. Especially in combination with Groups.

Now try to rotate the desk using the Rotate command with Disjoin checked – it will not work. The desk won’t rotate. Unless you do the same without Disjoin checked which logically can be described as “confusing”. My inner Tuvok/Spock is greatly concerned.

The Death and re-birth of a Scope Box

I have a strange relationship with Scope Boxes – perhaps from my applications. They are truly the hero of Revit – and everyone has opinions about them – “why don’t they snap”, “why are they only boxes”, how do I schedule them” and so on. But I kind of like them. This bug with Scope Boxes is more than concerning.

Create a Scope Box, lock a view to it. Imagine it’s controlling hundreds of views in your model. Now try to move it using the Move command with Disjoin checked. It will move but at the same time become a new Scope Box – and your views are now not controlled by the Scope Box anymore. So, it works like a copy and delete command? Brr.

Even scarier – try to rotate the Scope Box using the Rotate command with Disjoin checked – it will now rotate but also become a new Scope Box without you noticing. And those hundreds of views? They are now free and not controlled by your Scope Box. Scary. Very, very scary.

I do a lot of coordinates in Revit, sometimes (or rather, often) it feels like I do a bit too much work around coordinates. And this one is perhaps not scary but slightly confusing. Especially if you’re doing a Revit & Coordinates class and your students notice that the teacher failed to update the coordinates.

It’s quite simple – make a Revit link attached to a Shared site and then Rotate or Move it with Disjoin checked – it will now forget its Shared Site and not save any updated coordinates to that Revit file unless you notice and manually set the Shared Site again. Which is quite easy to miss.

These are the things I have noticed just during the last couple of weeks, I heard something around Area boundaries as well – there are probably more examples and weird things out there – be careful with Disjoin!

Here’s a “funny” thing you can try at home – create a Wall and give it a number on Mark. Imagine that number is Important. Now rotate the wall with Disjoin checked. Happy days – it has become a new wall and your Mark is …gone… Doors makes for even more giggles . And Rooms? Oh Yes. Similar problem. Once again – please – be careful with Disjoin!